Where's my stopcock? Don't leave it until it's too late!

You never know when you might get a leak. If you spot a leak you will need to act fast to minimise water damage. Initially you might not know the cause of the leak. For example, it might be a mains water leak; or a leak from your central heating system; or a leak from a waste water pipe. So, your first port of call should be to turn off your mains water at the stopcock until you can assess the situation. 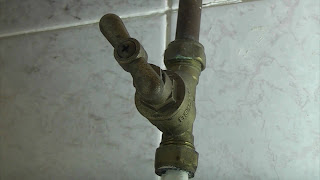 When I visit homes to do plumbing work I am amazed at how many people don't know the whereabouts of their stopcock. In some instances the customer knows where it is but it is very awkward to access (boxed in or buried under lots of stuff!). I had one a few weeks back where I just could not access the stopcock at all because the kitchen fitter had put new units in the way.

Then there's the other problem. You know the location of the stopcock and it is easily accessible, and you think great. But you go to turn it off and it just doesn't turn as it's jammed, or it turns but doesn't totally shut the water off.

If for any reason you can't turn your stopcock off, you will need to locate the external stopcock (usually under a small metal grid on the pavement in front of your house). These can be a real pain to locate and to turn off - but I'll keep that for a future blog! Anyway, in an emergency you hardly want to start scrabbling about trying to turn the water off in the street! 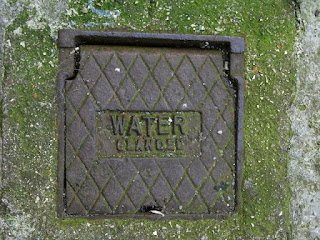 I remember getting a call at 8pm during that really cold winter back in 2010. An elderly chap said he had water coming through his upstairs ceiling. First thing I told him was to turn his stopcock off. I was at his house well within an hour. Unfortunately, he hadn't been able to locate his stopcock and subsequently the water had caused a huge amount of damage in quite a short time - as well as now being ankle deep in water, it had also got into the electrics and fused everything! So first thing was to isolate the water in the street, then make sure all the electrics were isolated, before finding that the leak was due to a burst pipe in the loft. I fixed the burst, located the internal stopcock (under the kitchen unit plinth!) and then called his daughter. There was no way he would be able to stay in a saturated house, with no heating (I seem to remember it was -5 degrees outside!) and no electricity.

I always remember this incident because I think of how much damage could have been avoided (or at least minimised) if he had been able to turn the water off quickly.

MY TOP TIPS
IF YOU GET A LEAK

Most importantly, and this is my main point: don't wait until you have an emergency!